This page is for those who are curious about the programs and equipment I use to get work done. It’s inspired by uses.tech.

As far as operating systems go, I have used OpenBSD, Artix Linux, Alpine Linux (briefly), Gentoo (briefly), Debian, Ubuntu, Kubuntu, Linux Mint, OpenSUSE, MacOS, Windows, and have tried various others. On those systems I eventually began using a tiling window manager and a bunch of hand-picked applications—which you can check out on the old software page—but have since moved on from that to simpler less fiddly setups.

Over time, my choice in software has shifted from a philosophy of idealist minimalism to one of pragmatism. These days, I prefer to use a tool that will work with minimal excess configuration over one that requires me to spend hours configuring it and learning keyboard shortcuts. I don’t mind a bit of tinkering here and there, but I want a stable workstation and set of tools that let me get on with my work and don’t impose unnecessary additional cognitive load.

These days I run various OSes and have no strong preference for any particular desktop environment, Neovim is my editor of choice, Ungoogled-Chromium is my web browser of choice, and I run a very lean ksh-variant shell typically without persistent history or advanced tab completion. I keep my dotfiles in a git repository (they are tailored to OpenBSD, but I use them on Linux too).

On my servers I use OpenBSD wherever I can. Sometimes I use FreeBSD if I really need ZFS or Jails. I also use Debian when an application doesn’t work well or doesn’t have straightforward installation steps on the BSDs because it’s typically the most well-supported option (e.g. for running Steam game servers).

When it comes to colours, I prefer my systems and applications to have muted or monochrome colour schemes. I find very colourful interfaces distracting and prefer when colours are used sparingly to achieve a specific effect such as drawing a user’s eyes to important UI elements or to make one part of text stand out strongly from another (e.g. highlighting spelling mistakes).

Here is a screenshot of what my typical software setup looks like (though this is not necessarily representative of what I’m running at this very moment): 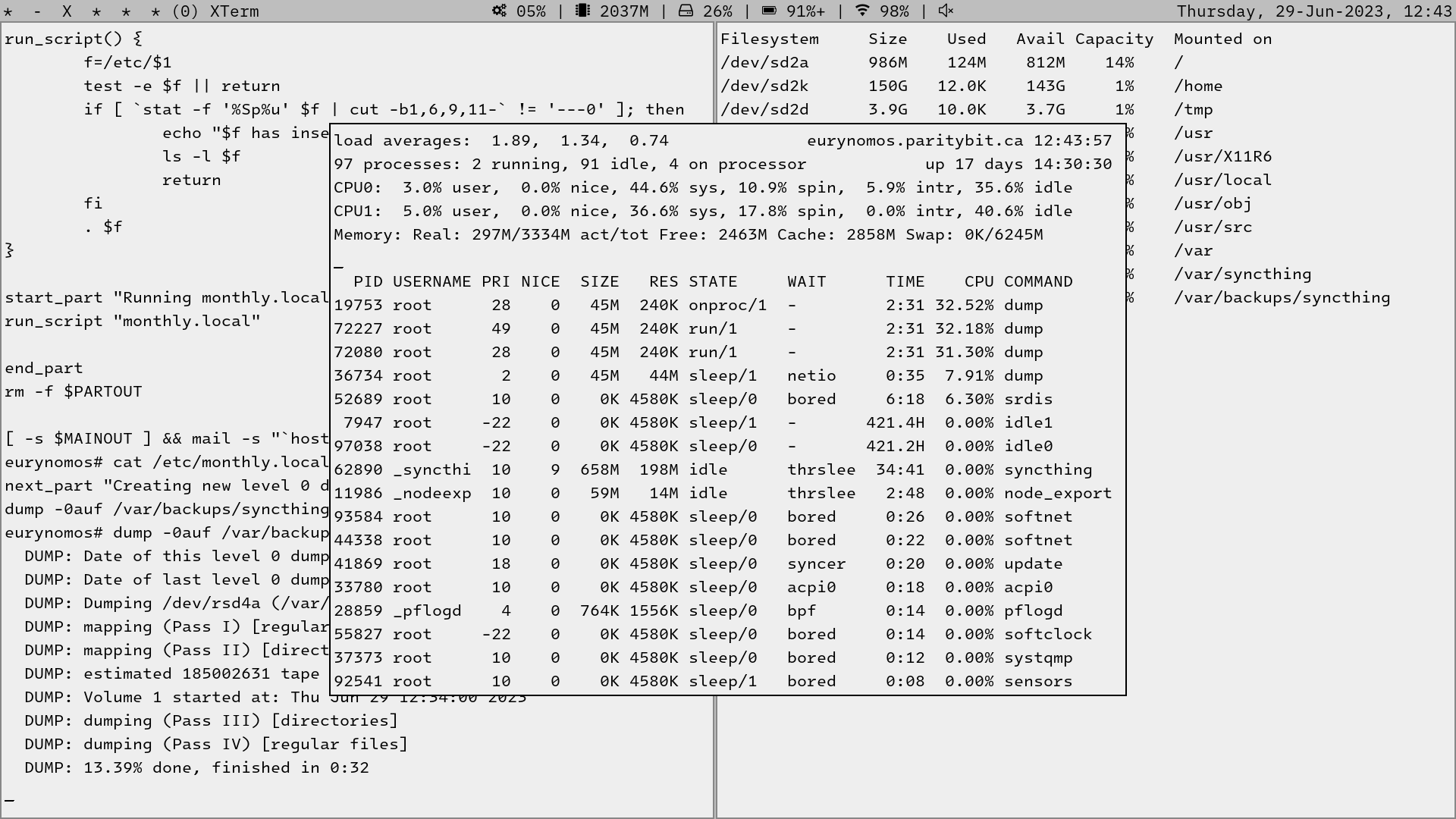 I got this machine pretty much for the better gaming performance. Gaming is an important activity I do with my friends who are spread across the world and it helped keep me sane during lockdown.

I use a Vortex Tab90M keyboard with Cherry MX Black switches and a Logitech MX Ergo wireless mouse. I have a pair of Beyerdynamic DT770 Pro 250 Ohm headphones driven by a FiiO E10K USB DAC and a Blue Snowball microphone. I have a Logitech C920 webcam, though it doesn’t get that much use.

This is currently being used by my partner.

The most important factor that I look at when judging a laptop is the UI/UX. I don’t want a laptop that feels cheap (wobbly screen, flexible or creaky chassis, terrible trackpad or keyboard, loud fans, etc). That is more important to me than performance. I also prefer a screen size between 12” and 14”, with 13” being ideal.

It works pretty well as a texting and calling device. Also the camera is great.

These are used as and when I need them. For example, if I need to spin up a game server for friends, I’ll stick an OS on one of these and use it for that purpose.